How to build your own city: DIY at its best in XYZ OPEN CITY Ever thought of building a whole new city from scratch? Although it sounds impossible, a team of urbanists, designers and architects from N55 platform found the perfect DIY, recyclable solution.

Using a modular structure with low cost aluminium tubes, similar to the famous LEGO system, the project proposes persons in local communities to use it as a tool to implement a wide range of shared functions in public space. The experimental city the artists already built in an abandoned areas in Jutland, Denmark or inside bigger cities in Netherlands, is called XYZ OPEN CITY.

The XYZ OPEN CITY system can be used to build anything from urban gardens to fully functional insulated housing. Building materials can be new or recycled. XYZ OPEN CITY constructions can be dedicated to a specific purpose like for example an OPEN POWER STATION based on solar panels or wind turbines or it can form multifunctional buildings providing a variety of facilities. It can also be used to construct new infrastructure like bridges, etc. XYZ OPEN CITY proposes to share things in public space as an alternative to state or private ownership and hereby to establish new commons. XYZ OPEN CITY can plug into existing infrastructure and change the functions of existing buildings, indoors or outdoors, or it can be used to build a new city from scratch. When the system is implemented in an area, it can grow in relation to local needs and wishes. The XYZ OPEN CITY system can be seen as a do-it-yourself urban planning tool; An alternative to the top down urban planning that dominates most cities in the world. 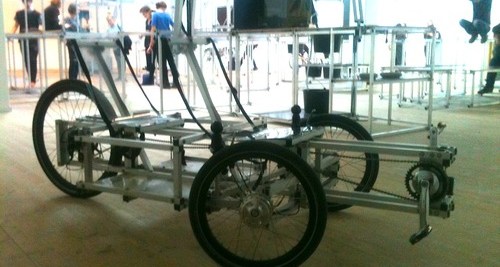 Cargo bike made of aluminium frames and recycled wheels. Photo by Braindeer 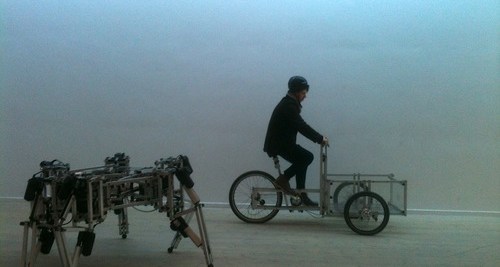 A ride with N55’s customed bicycles in Aarhus, Denmark. Photo by Braindeer N55 encourage persons to build their own XYZ OPEN CITIES and hereby influence their local urban environments.  The single modules are so lightweight that a crowd of people can carry one each, gather up at a site and quickly create a large structure with different functions in public space.

It’s worth mentioning that in XYZ OPEN CITY the cars are generally not allowed, cyclists and pedestrians being encouraged to keep the clean air of the city and practice a healthy lifestyle. It is the reason why the N55 team designed and built their own cargo bicycles for carrying people and goods easily.

The overall appearance and functions of the XYZ OPEN CITY are determined by the do-it-yourself builders. The basic cubic building blocks are identical and can be combined freely within an orthogonal system in all directions. Each module can accommodate a different function and modules can be combined to form overall functions.The building blocks themselves consists of identical struts made from locally available materials.

Intelligent urban design would require the design of systems which adjust themselves to the persons who live in them and to their needs. Unlike a top-down master plan, such systems gradually dissolve themselves as the inhabitants take over and transform their city according to their needs and desires.

Based on collaboration, cooperation and diversity, intelligent cities acknowledge that we are social beings needing space for being different. It is possible to let the growth of the city be framed by simple rules, which allows people to freely develop their own environments and systems. N55 propose a critical approach to city design by daring to give the inhabitants real and meaningful influence on the form and function of their city, and by using friendly technologies, which allows our urban environment to exist in symbiosis with our planet rather than as a parasite.