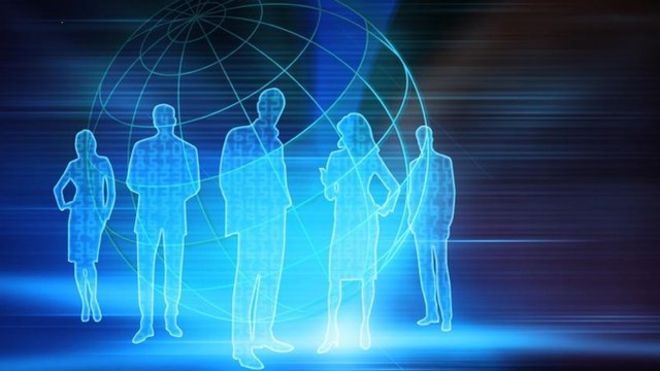 If you are sitting at a desk, driving a taxi or carrying a hod, stop for a moment and ask: could a robot or machine do this job better?

The answer, unfortunately for you, is probably – yes.

The debate about whether machines will eliminate the need for human employment is no longer just academic.

Boston Consulting Group predicts that by 2025, up to a quarter of jobs will be replaced by either smart software or robots, while a study from Oxford University has suggested that 35% of existing UK jobs are at risk of automation in the next 20 years.

Office workers who do repetitive jobs such as writing reports or drawing up spreadsheets are easily replaced with software but what other jobs are under threat? The BBC looks at some of the jobs that are already being done by machines.

To find out more about whether your job is at risk of automation in the next two decades, check out the BBC’s interactive graphic.

Why have an “extra” person in the car?

Taxi drivers in cities around the world are currently embroiled in rows with Uber – the app-based, on-demand service whose drivers, they argue, are subject to less regulation than them.

But Uber, along with most of the major car manufacturers and Google, is already looking beyond a rival service to one that gets rid of the driver altogether.

As chief executive Travis Kalanick puts it – the service would be a whole lot cheaper if you weren’t “paying for that other dude in the car”.

Later this year, automated taxi pods will start running on the streets of England’s Milton Keynes, offering rides around the town. The UK government is updating the highway code to take account of driverless cars.

For the moment though “the other dude in the car” is in defiant mood.

Autonomous vehicles will need primary legislation changes to operate on UK roads, the technology is in its infancy and untried and tested in busy urban environments, it ain’t happening for many a year. In reality it is doubtful if autonomous cars could ever work alongside conventionally driven vehicles.

In China, humans are already building robots that will ultimately take their jobs.

The first robot-only factory is being built in China’s Dongguan factory city.

The factory, owned by Sehnzhen Evenwin Precision Technology, aims to reduce the current workforce of 1,800 by 90%, according to Chen Zingui, chairman of the board.

But Chinese ambitions for a robot workforce go much further.

Since September last year, a total of 505 factories across Dongguan have invested 4.2bn yuan (£430m) in robots, aiming to replace more than 30,000 workers, according to the Dongguan Economy and Information Technology Bureau.

Foxconn, maker of electronic devices such as Apple’s iPhone, also plans a robot army although its ambitions are slightly more modest – aiming for a 30% robot workforce in the next five years.

Is my job under threat? Could a machine write a compelling news story that humans would want to read?

The chances are if you have recently read a corporate earning report on Forbes or a sports story on AP, it was written by a robot.

Companies such as Narrative Science offer software such as Quill that is able to take data and turn it into something understandable.

Quill writes company reports ahead of earnings announcements and Narrative Science claims this means Forbes can now offer this sort of report for thousands of companies rather than just the handful that could be written up by a human journalist.

Narrative Science chief scientist Kristian Hammond has previously said that in 15 years’ time, 90% of news will be written by machines but, he told the BBC, that didn’t mean that 90% of journalist jobs would go.

“It means that the journalists can extend their reach. The world of news will expand,” he said.

The journalists will not be generating stories from data. That unambiguous, not-open-to-interpretation stuff will be done by machines.

Would a patient rather see a robot doctor?

A robot may not yet have a good bedside manner but it is pretty good at wading through huge reams of data to find possible treatments for diseases.

IBM’s supercomputer Watson is teaming up with a dozen hospitals in the US, offering advice on the best treatments for a range of cancers. Using vision software developed by the firm, it is also helping to spot early-stage skin cancers.

And robots have for years been helping doctors perform surgery – at Guy’s and St Thomas’ NHS Foundation Trust, for example, robots assist doctors with keyhole kidney surgery. Speed is a crucial factor in the success of such operations and the robots are able to sew blood vessels connecting donor kidneys far more quickly than humans.

Robotic surgery is not foolproof though and a recent safety report found that machine-based surgeries were linked to at least 144 deaths in the US over the last decade.

For the moment, robot and man work side-by-side in medicine but that may not always be the case.

“Doctors in particular aren’t likely to graciously cede control of their patients’ treatment to synthetic intellects,” writes Jerry Kaplan in his book Humans Need Not Apply.

But eventually, when outcomes demonstrate that this is the better option, patients will demand to see the attentive robot, not the overworked doctor, for a fraction of the fee. 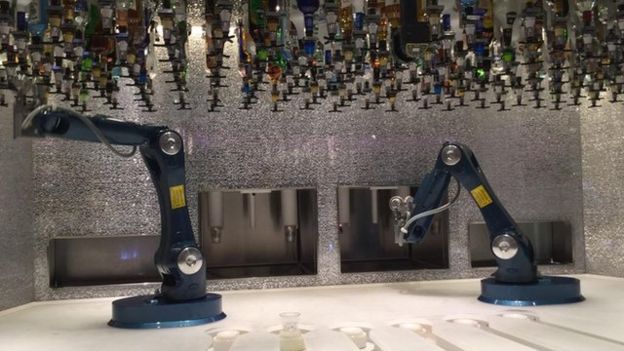 Fancy a gin fizz? Hold on, the robot will make you one

Royal Caribbean’s luxury cruise ship Anthem of the Seas has recently installed a robotic bar – Shakr Makr – a machine developed at MIT a few years ago.

Drinks can be ordered via a tablet device and users aren’t limited to a set menu – they can, if they are brave enough, create their own cocktail.

The robotic arm mixes the cocktail and pours it into a plastic (to avoid breakages) glass that sits in a trough (its pouring skills aren’t always precise). And it does so with some panache – filling the cocktail mixer from optics above it and even shaking it before pouring.

In the interests of science, the BBC tested two from the robotic bar and two from a traditional cocktail waiter in a conventional bar on board the ship.

The robotic concoctions did not actually taste that good – they lacked the fine-tuning, like the fresh twist of lemon that the human bartender added. 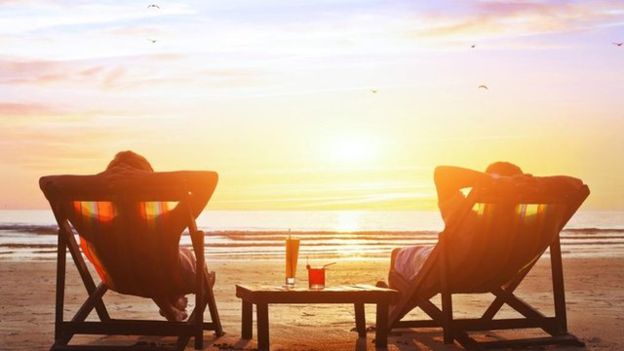 Will we all have more free time if our jobs are taken by robots?

These examples illustrate both the possibilities and limitations of robotic workers but each one could easily have been replaced with others – lorry drivers, hotel workers, lawyers – all of which have robot versions that are actually being used today.

It raises the question – what will humans do when their skills are surplus to requirements?

Martin Ford – author of Rise of the Robots – thinks we face mass unemployment and economic collapse unless we make radical changes, such as offering humans a basic wage, a guaranteed income.

What humans will actually do with all their free time is harder to assess – spend more time at the beach think some, while others argue for the need to keep the human touch in the work place.

I strongly hope that teachers, doctors and judges will remain human because sometimes you need someone to talk to,

After all, the work we do currently is as much about talking as it is about getting a job done efficiently and, whatever they may be good at, robots engaging in office banter isn’t happening any time soon.