Jim Onan was a man who always interested in the Egyptian culture and stumbled upon a university study one day suggesting that pyramids at Giza generated energy. Jim came from humble beginnings, He had 5 children with his his wife Linda and he was a hardworking man who built his own concrete business from the ground up. In the 70’s Pyramid’s became more popular because of the mysteries coming forth. His curiosity led him to build small pyramids around his home and people realized that when they put their hands above this small pyramid they felt a weird sensation, a vortex of energy coming from the top of the Pyramid.

One day, Jim was talking with his wife Linda about what kind of home they should build and Linda jokingly said “Why don’t you build it out of a pyramid” and that gave him quite the idea, he was going to build his families home as a pyramid structure, and he did.  He built the Pyramid home for his family and it was an exact replica model of the Pyramid’s of giza at 1/9th the size.

As the building came into completion and the pyramid form took shape something astonishing happend. The middle of the home started bubbling up with water and the spring water started entering the first floor (the bottom) of the pyramid. Astonished and confused, they scrapped the plans to have an indoor pool on the first floor of the pyramid and instead had to bring in experts to reroute the water to funnel it out of the pyramid home and into the surrounding area. 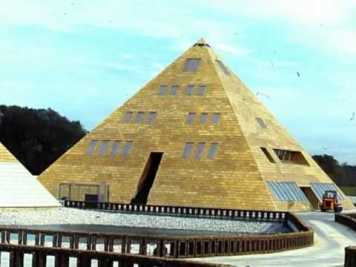 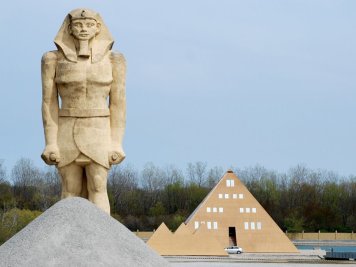 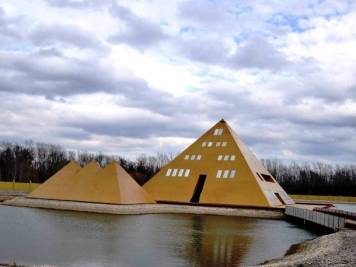 Some say that the shape of the pyramid itself helped to bring this spring to life and fill the surrounding area with spring water. This is really the only conclusion that I see considering there was no water there before and once the pyramid took shape this is when the water started bubbling up. Quite incredible huh? A pyramid structure helped to bring spring water to the surface.

Additionally Jim Onan was very passionate about Egyptian architecture and culture and decided he wanted to coat the pyramid in gold. He coated the pyramid in 24-karat gold surrounding the whole pyramid costing an incredible $1 Million US dollars. This is now the largest golden plated structure in North America. Naturally, this structure got a lot of attention from the local community and the press and it got a lot of exposure. Tourists started flocking by the thousands and they created a tourism business out of it.