Don’t trust everything you see.

Abbott Laboratories, makers of Similac infant formula, issued a recall after discovering some of its products may have been contaminated with beetles (and beetle larvae). The mainstream media ran with this story and parents everywhere suddenly got concerned that their babies might be drinking beetle parts.

But are beetles really the scariest thing in Similac? Not by a long shot if you know anything about nutrition.

A 24-oz container of Similac Go & Grow soy-based formula, emblazoned with a cute teddy bear on the front label and positioned towards “9 to 24 months.” It comes with the claim “balanced nutrition for older babies.” But is it really balanced nutrition?

The very first ingredient, shown right on the label, is 42.6% CORN SYRUP SOLIDS. 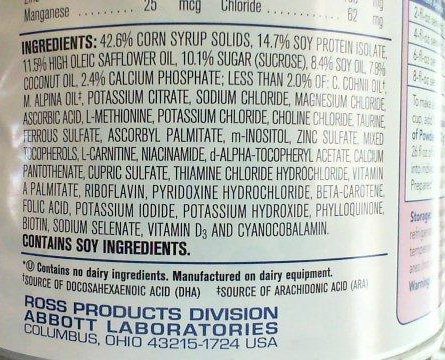 That’s a form of highly processed sugar. Is this really what infants need — nearly half their formula to be made of corn syrup sugars? Nutritionists would strongly disagree.

The next ingredient is 14.7% SOY PROTEIN ISOLATE. Most soy protein, as NaturalNews readers already know, is derived from a hexane chemical extraction process.

Beyond the hexane question, did you know that 91% of the soy fields grown in America contain genetically modified soy? The Similac can does not say “non-GMO soy” because it’s not required to be put on the label (thanks to the FDA shell game). But Consumer Reports actually bought and tested infant formula for genetically engineered DNA and found that Similac was using GMO soy in their products.

With this in mind, what we really have with Similac infant formula is powered sugars, genetically modified soy protein, more sugar, safflower and soy oils, a bit of coconut oil and some vitamin chemicals made with cyanide molecules. They also throw in some DHA to make moms think it must somehow resemble breast milk fats.