This Quiet Town Is Burning Since 1962

In what seems like the plot to a disaster movie, the quiet town of Centralia, Pennsylvania has endured a burning problem since 1962: It’s been on fire, literally, for the past 53 years.

And how this fire started still remains a mystery. But chemistry can help explain why it’s still going.

Centralia, Pennsylvania sits atop a few of the biggest coal deposits in the world. This was fortuitous for the sleepy town at the time because coal was — and still is — one of the main sources of energy and electricity, having fueled the Industrial Revolution.

In the 1800s, miners in Centralia blasted tunnels underground to harvest the coal, but by the mid-1900s, many of the mines where abandoned.

No one knows exactly how the Centralia fire started, but the strongest theory is that burning trash from a nearby landfill accidentally ignited coal below an old entrance to the mine. The fire then spread through the mines

Coal is formed over millions of years when swamps and bogs full of organic matter like trees, roots, and bacteria are buried under sand, mud, and other natural materials. The pressure on the organic matter increases as layers of earth above it grow over time, and all of the water and other substances from the buried plants and trees get squeezed out, forming coal that ends up being mostly carbon — about 40-90% carbon by weight.

When the carbon inside coal mixes with oxygen, it ignites. It can even begin spontaneously without a flame nearby.

Those tunnels that the miners dug in the 1800s fed the flames by siphoning in oxygen from the surface. Then, as more coal burned, the flames bit deeper and deeper into the surrounding region — a whopping 300-feet-deep — in a vicious, fiery cycle that wouldn’t stop.

Coal burns slow and steady, which means that it takes a very long time to burn out. This is unlike timber in a forest or a camp fire, which smolders quickly.

Today, the Centralia fire covers six square miles and spreads 75 feet per year. Shockingly, it could burn for another 250 years.

The 1,000 residents that lived in Centralia at the time thought the fire was a silly inconvenience at first. But that changed when sulfurous fumes and carbon monoxide began seeping out of the mine, nearly suffocating them in their homes. The underground fire also fractured the ground, making sinkholes pop up all over the place. A 12-year-old was nearly consumed by one in 1981. 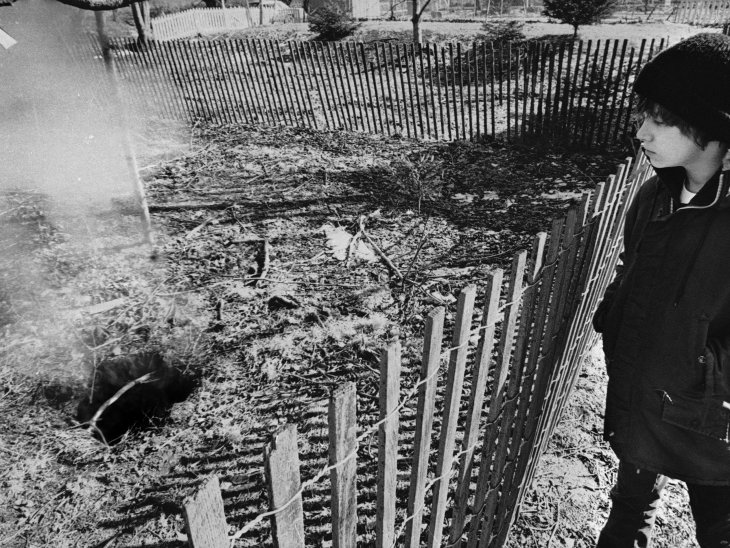 12-year-old Todd Domboski looks at the hole he fell through just hours before this photo was taken in Centralia, Pa. in 1981. – Associated Press

The town has tried in vain to snuff out the flames over the years. They drilled holes into the mine and plugged them up with wet sand to choke off the air supply, but it didn’t work. They stopped trying to put it out in the 1980s and haven’t made another attempt since. 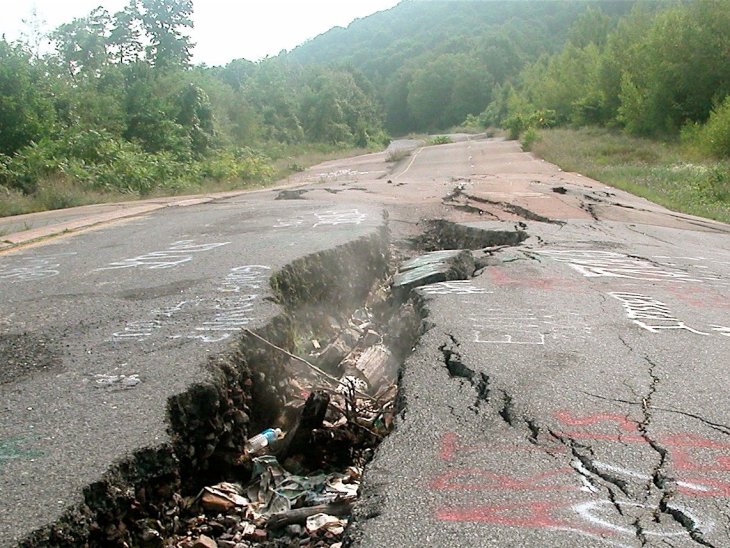 Smoke emanating from a fissure in the road on the abandoned section of highway 61 near Centralia, PA. An underground mine fire has been burning there since 1962. – Flickr/Lyndi & Jason

The state government condemned Centralia in 1992 and almost all of its residents left. Today, just about a dozen people live there. The town has been taken over by graffiti artists.

While a long-burning, underground fire may seem like a freak occurrence, they are actually fairly common. Today, mine fires are burning in New Zealand, Wyoming, India, China, and Turkmenistan.

Fires like this also exist naturally too, with a few thousand burning around the world.

Also the American Chemical Society made a YouTube video about the Centralia fire on their Reactions channel. Check it out for more fiery details.