Russell Howard has launched a scathing – and hilarious – attack on the government over the junior doctors row.

Taking the stage on his BBC comedy show, the comedian extolled the virtues of the NHS and those who work for it for low wages in the same year that MPs got a 10% pay rise.

He said: “I’m not surprised junior doctors are pissed off, they’re amazing selfless human beings that work ridiculous hours saving lives and what do they get for it? Less than £23,000!

He then goes on to criticise “bell-end” health secretary, Jeremy Hunt for saying doctors should work weekends when they already do.

The row relates to proposed changes to the employment contracts of junior doctors in the NHS which are causing widespread disquiet and concerns at changing working conditions, pay, and a lack of fairness.

Here are six things you need to know about the changes, and the continuing furore…

Who are junior doctors? 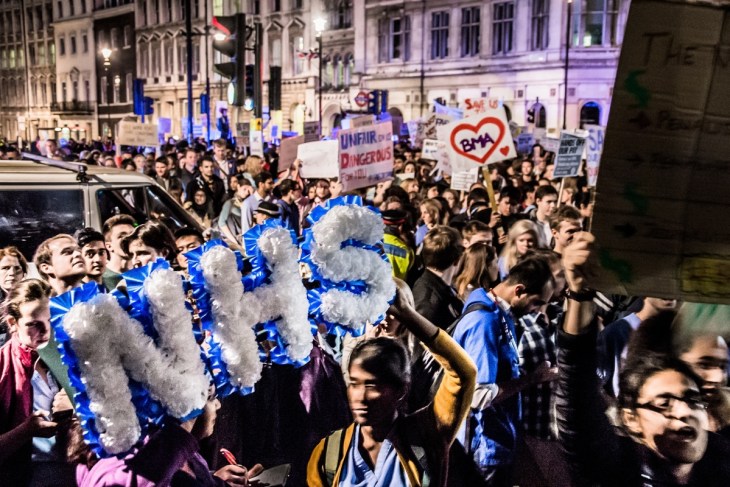 Junior doctors are those doctors who have graduated from medical school but who are yet to qualify as either a consultant or general practitioner.

Doctors are required to undertake five years of medical training and to graduate from accredited schools before entering what’s known as a foundation period.

They are then required to work as juniors during the foundation period before ascending to consultant or GP status. This means many doctors do not fully qualify until well into their 30s.

Why are their contracts changing? 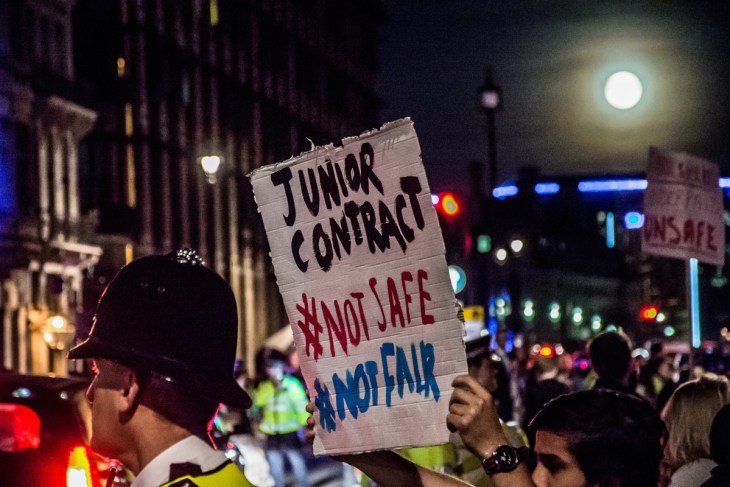 Demands upon the NHS are increasing, and at the same time, the government wants to move towards a seven-day, out-of-hours health service.

He has denied the charge that the contracts are specifically designed to lower the wage bill of doctors who’ll be forced to work ‘out of hours’ for no extra pay.

Why are people unhappy? They say that introducing new shift patterns and broadening normal working days to include hours up to 10pm may have the effect of increasing tiredness amongst medics.

The new contracts may impinge on doctors’ work-life balance, reduce time spent with their families, and may increase work-related stress. These may affect patient care, some argue.

Dr Shebby Kamalvand wrote of the hypocrisy of the proposals – the implication that doctors are worth less than they are paid now, but are required to work more flexibly to cope with increased demand.

The proposals may also make things less fair for those working less than full time and taking parental leave.

But most of all, the British Medical Association believes the threat of imposition to be entirely unacceptable — a stumbling block so large it has halted negotiations entirely.

What do they want?

According to the British Medical Association, which represents junior doctors in negotiations, they want:

“The BMA wants the following concrete assurances in writing from the Government before we can agree to re-enter negotiations:

The contract proposed by the Government rides roughshod over the best interests of doctors, of patients and of the NHS as a whole. Junior doctors have made it clear that they are not prepared to accept a contract that is unfair and unsafe.”

Will they get it? Negotiations are currently at an impasse, with both NHS Employers, which acts on behalf of government, and representatives of junior doctors refusing to budge on the threat of imposition.

A staged introduction of the new changes could take effect whereby those joining the profession are subject to the new conditions.

However, this may do little to tackle the dire recruitment and retention of foundation level junior doctors.

Jeremy Hunt is likely to move forward in a way which brings junior doctors back around the negotiating table.

And what if they don’t?

Members of his own party have highlighted cases of doctors emigrating from the UK to work as doctors elsewhere. Dr Sarah Wollaston, now a Tory MP and chair of the Commons Health Select Committee, says that her own daughter and eight of her doctor friends have left the UK for Australia.

And it doesn’t look like they’ll be alone in leaving Britain. The General Medical Council has received more applications for a Certificate of Currently Professional Status so far this year as it did in the whole of 2014. The Certificate is needed if doctors wish to practice medicine abroad.