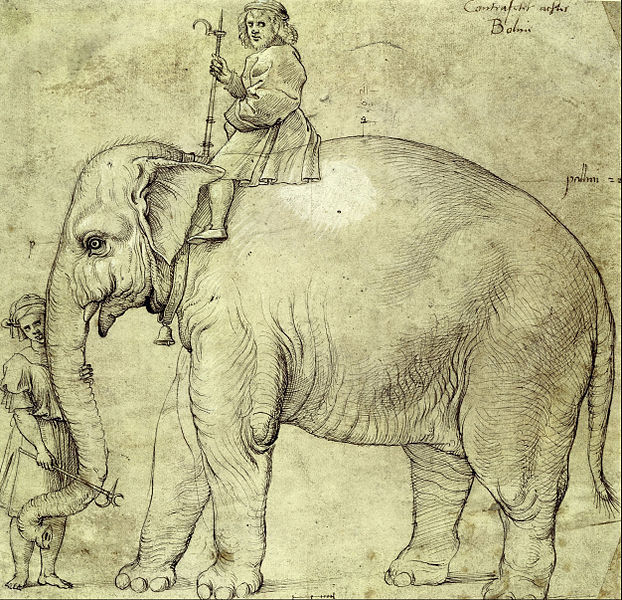 In February of 1962, while digging up the Vatican’s Belvedere Courtyard to modernize a heating and cooling system, a group of Italian workers hit bone. There was a large tooth and four pieces of a giant jawbone, and at first they thought they had found a dinosaur.

But the bones were not fossilized, and when the custodian of the Vatican Library collection had them examined, he learned that they belonged to a much more modern mammal—an elephant.

For decades, no one inquired further into the provenance of the elephant skeleton buried beneath the Vatican, until in the 1980s and 90s, the Smithsonian’s Historian Emeritus, Silvio Bedini, uncovered the elephant’s history. He published the results of his research in 1997, in “The Pope’s Elephant”, the most thorough study to date of the elephant that lived in the Cortile del Belvedere. 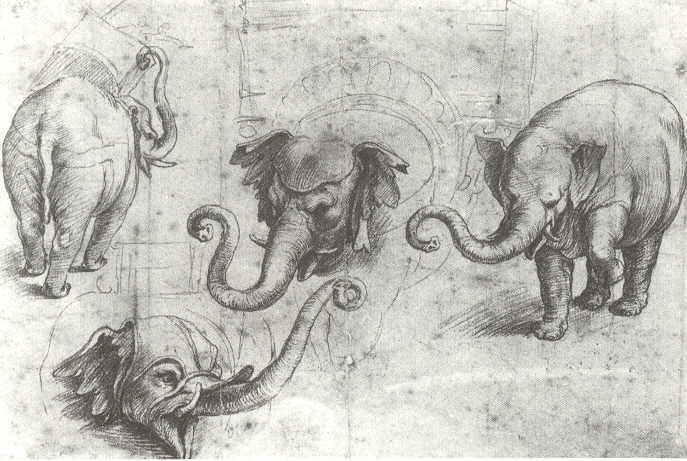 One of Raphael’s sketches of Hanno

His name was Annone—or, once anglicized, Hanno—and he belonged to Pope Leo X, who was elected pope in 1513. Hanno was not just a pet: he played a part in the politics of Portuguese expansion and made a cameo in the Protestant Reformation. But above all, Hanno was a wonder. No elephant had been in Italy since the Roman empire fell, and the entire country clamored to get a glimpse of him.

Hanno the Elephant arrived in Italy in the winter of 1514, and on his slow march to Rome, he left a path of destruction in his wake. He wasn’t such a large elephant (his shoulder reached about four feet tall), and he did not move very fast, especially on the hard Italian road, which hurt his feet. But wherever the elephant went, people wanted to see him, and they trampled fields, crashed in roofs, and tore through walls in order to get a glimpse.

Hanno had come from India, by way of Portugal. In the early 16th century, the Portuguese monarchy was expanding its reach throughout the world, trading with India and the East Indies, and consolidating control over the spice trade. As part of this commercial enterprise, the menagerie in Lisbon was filling with strange creatures from across the globe, and a decade before Hanno came to Italy, Portugal had sent a previous pope parrots, mandrils, leopards and a whole bunch of monkeys. 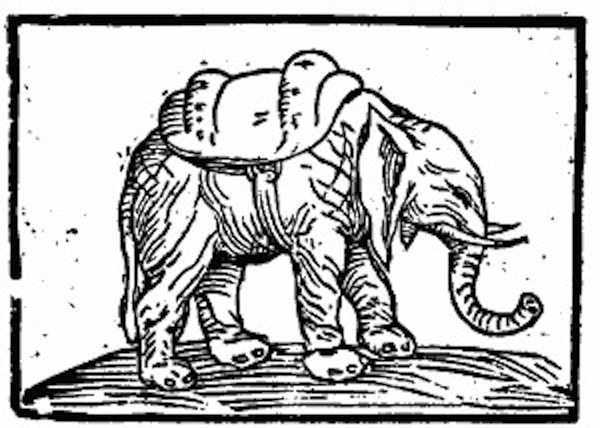 A woodcut of Hanno, circa 1514 (Image: Philomathes/Wikimedia)

At the time that Giovanni di Lorenzo de’Medici (of the famous Florentine Medici family) became Pope Leo X, the Portuguese king, Manuel I, was working to solidify his country’s hold on the spice trade. The Portuguese expansion over the oceans had threatened the monopoly that overland traders had held, and Egypt, which had long benefited from that monopoly, was pushing the Pope to pull back on Portugal. Egyptian leaders did have leverage: they controlled Jerusalem and could destroy Christian holy sites, if the Pope side against them.

It was traditional for Christian rulers to send a gift to a new pope upon his election, and Manuel I knew that this was a political opportunity, as well. He could ask for money, to expand his fleet of ships and artillery, and he could obtain the Pope’s blessing for Portuguese expansionism. He carefully planned what he would send—textiles, a gold chalice, a brocade altar cover, and other treasures wrought with gold and jewels. He sent a cheetah, leopards, parrots, strange dogs and a Persian horse. And he sent Hanno.

Italians knew that elephants existed: Hannibal had famously crossed the Alps with war elephants, and Roman consuls had kept them in wealthier times. Every few hundred years or so, for the previous millennium, an elephant had appeared in some European court. But Hanno was the first to come to Italy in centuries, making him the ultimate must-see attraction across the empire.

On the 70-mile journey from the Port of Hercules to Rome, Bedini wrote, “the caravan that was following behind daily increased in size, supplemented by workers from the towns, peasants from the fields, and gentlemen from their villas. All were curious, avidly seeking a view of the great animals and the strangers speaking a strange language who accompanied it.” The elephant had to spend the night in a piazza so that curiosity seekers wouldn’t storm the stable it was supposed to stay in, and all along the way, wealthy noblemen tried to convince the elephant’s handlers to take a detour to their castles.

Hanno arrived in Rome just before he was scheduled to appear before the Pope. And in his first official appearance, he made an equally dramatic impression. Walking through the streets of Rome adorned with handsome vestment and with a silver tower on his back, Hanno dropped to his dropped to his knees and bowed his head low upon reaching the Pope, before lifting back up to trumpet three times in the air. Then he sucked water into his trunk and sprayed water down on everyone assembled—including the Pope, who thought the whole of the elephant’s performance delightful. 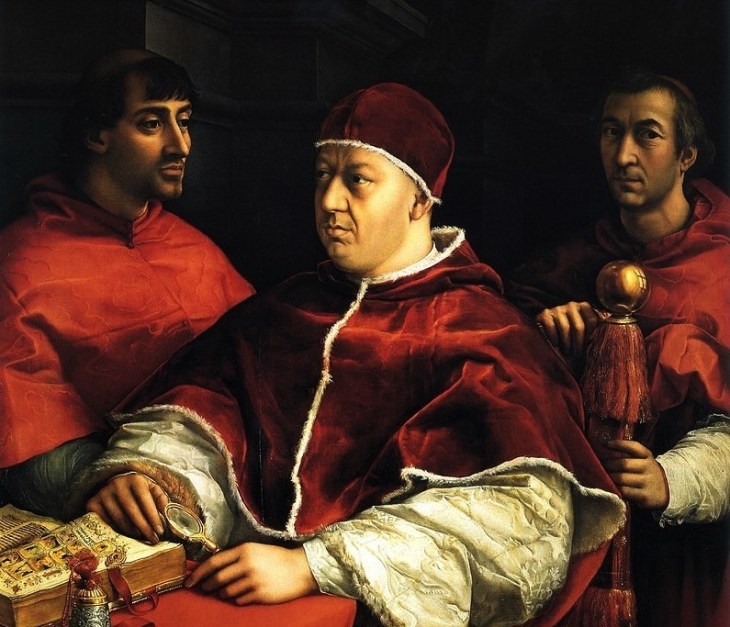 Sadly, though, Hanno’s time in Rome was short. He was four years old when he arrived, and he lived to be seven. But immediately, he became a favorite of the pope, who wrote to King Manuel I:

“It was the elephant which excited the greatest astonishment to the whole world, as much from the memories it evoked of the ancient past, for the arrival of similar beast was fairly frequent in the days of ancient Rome… One is almost tempted to put faith in the assertion of the idolators who pretend that a certain affinity exists between these animals and mankind. The sight of this quadruped provides us with the greatest amusement and has become for our people an object of extraordinary wonder.”

The pope built a special building to house the elephant, on the Courtile de Belvedere, and allowed the people of Rome to visit him each weekend. And on occasion, he was paraded through Rome.

Not that this generally went well. Once, the Pope had a famous poet dressed in Roman clothing, and perched on Hanno’s back as part of a parade through the city. But the noise of the parade—the trumpets, the drums—made the elephant panic, and eventually, he threw his rider. Another time, a cannon spooked him, and he stampeded, injuring some of his fans. And at one viewing, the crowds were so tight that nobles on horseback ended up crushing less wealthy people to death. 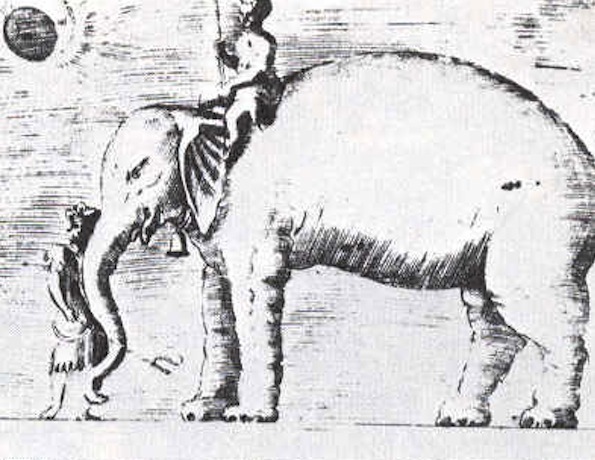 In 1516, he started having trouble breathing and was clearly in pain. Doctors were called in, and they determined that the elephant was constipated. They put together a plan of treatment— a suppository with a high dose of gold, a common treatment at the time. It quickly killed him.

There was an element of mysticism to the elephant’s death. Not longer before, a Franciscan monk who traveled with 20,000 followers predicted the deaths of a number of Church leaders, up to and including the pope. He also prophesized the death of Hanno, and his keeper. The elephant died within the prescribed period; so did the keeper, although his death got much less attention.

The pope mourned Hanno, writing a paean to the dead elephant. When he commissioned a mural commemorating the animal, he insisted that it be drawn by the artist Raphael himself, not just his studio.

This affection didn’t escape the attention of the papal satirists. “The subject formed the basis for one of the first published criticism leveled against him by German supporters of Martin Luther,” Bedini writes. (Luther’s 95 Theses would not appear until the following year.) And Pietro Aretino wrote The Last Will and Testament of the Elephant Hanno, a document which calls out particular people in the hierarchy of Rome. Just as the relics of saints were parceled out among the churches of Europe, Hanno detailed which cardinals should receive his body parts, including his skin, tusks, knees, tongue and, even, his penis.

But in reality, most of Hanno’s body remained in the Vatican. His tusks were removed and stored elsewhere, but the rest of him was buried beneath the courtyard where he had lived—and where his bones still lay today.