Since first stumbling onto an early type of image projector called a magic lantern over 40 years ago, Richard Balzer became instantly obsessed with early optical devices, from camera obscuras and praxinoscopes to anamorphic mirrors and zoetropes. Based in New York, Balzer has collected thousands of obscure and unusual devices such as phenakistoscopes, one of the first tools for achieving live animation. 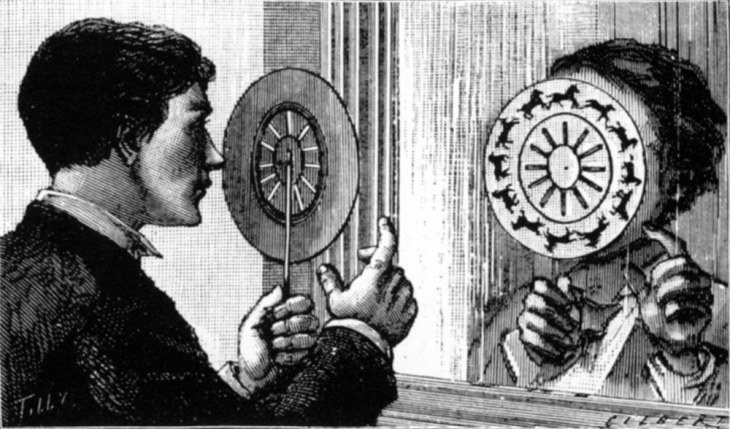 The phenakistoscope relies on a disc with sequential illustrations to create looping animations when viewed through small slits in a mirror, producing an effect not unlike the GIFs of today. These bizarre, psychedelic, and frequently morbid scenes (people eating other people seemed to a popular motif) were produced in great volumes across Europe in the early to mid 19th century. Balzer and his assistant Brian Duffy have been digitizing and animating these discs and sharing the results on Tumblr since 2012.

The optical toy, the phenakistoscope, was an early animation device that used the persistence of vision principle to create an illusion of motion. It was invented by Joseph Plateau in 1841.The phenakistoscope used a spinning disc attached vertically to a handle. Arrayed around the disc’s center were a series of drawings showing phases of the animation, and cut through it were a series of equally spaced radial slits. The user would spin the disc and look through the moving slits at the disc’s reflection in a mirror. The scanning of the slits across the reflected images kept them from simply blurring together, so that the user would see a rapid succession of images that appeared to be a single moving picture. A variant of it had two discs, one with slits and one with pictures; this was slightly more unwieldy but needed no mirror. Unlike the zoetrope and its successors, the phenakistoscope could only practically be used by one person at a time. 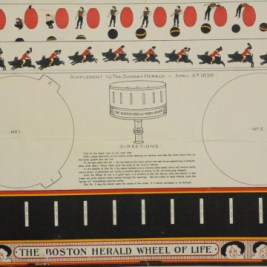