There have been many great love stories in the history of mankind — from Adam and Eve, to Romeo and Juliet, to John Lennon and Yoko Ono, to your neighbor and that Tinder guy she’s been dating for the past couple of months. 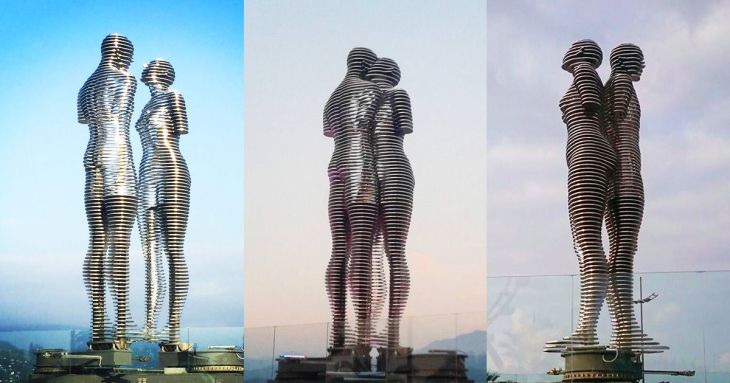 Otherwise known as the ‘Statue of Love,’ it’s a 23-foot-tall steel installation created by a noted Georgian artist, Tamara Kvesitadze.

But here’s a love story you probably haven’t heard: Ali and Nino.

Written by Azerbaijani author who goes by the name Kurban Said, the novel depicts a romantic affair between a Muslim boy, Ali, and Georgian princess, Nino. Coming from different cultural and religious backgrounds, these lovebirds face many struggles in their path, only to find themselves separated for eternity by the invasion of Soviet Russia.

First published back in 1937, the story has been translated into 37 languages and turned into a movie. But no tribute compares to this monument standing in Batumi, Georgia.

Walking along the promenade of Georgia’s seaside city Batumi you will see two massive figures sharing an intense gaze. These are Ali and Nino.
The sculpture is supposed to reflect on Ali and Nino’s love story and does it in the most astounding and, literally, moving way possible.