The Amazing Tale Of The Great Netherlands Horse Rescue

MARRUM, Netherlands — Rescuers on horseback lured a stranded herd of about 100 horses off a mud-soaked knoll where they had been stranded for three days and led them through receding floodwaters to safe ground.

Before they could be saved, 19 horses drowned or died of exposure from the days and nights on the earthen mound that was turned into an island during a storm Tuesday night.

The plight of the horses has riveted the country, which followed rescue attempts on television and in newspapers after the storm surge pushed sea water into the wilderness area outside the dikes of Marrum, a town 90 miles northeast of Amsterdam.

One of the women fell into the brackish water during the ride back to higher ground about 650 yards away, but she was uninjured and remounted her horse to finish the job.

Guides lead around 100 horses through flooded fields near Marrum, Netherlands, three days after the herd was stranded on a small knoll.

Last horse collapses
The remaining horse was led back later, escorted by riders. It collapsed after reaching shore, and was being attended by veterinarians.

The storm lifted the North Sea waters as much as 13 feet above normal. Three days later it was less than 3 feet deep in most flooded fields, but up to 6 feet deep where they are crisscrossed with drainage channels and barbed wire. 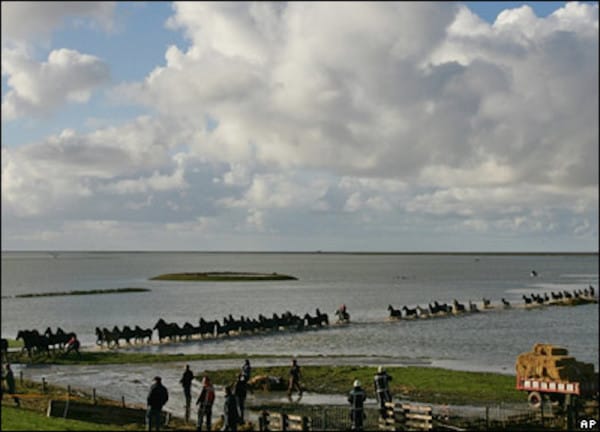 Marrum’s fire department floated or ferried around 20 horses, including the smallest foals, to safety with the help of small boats Wednesday, but rescue efforts later stalled.

Dutch television and newspapers showed dramatic images of the horses huddled together, their backs to the wind that was whipping up small waves in water surrounding their isolated island.

Rescuers had been feeding the animals with hay and giving them fresh water to drink to keep up their strength. 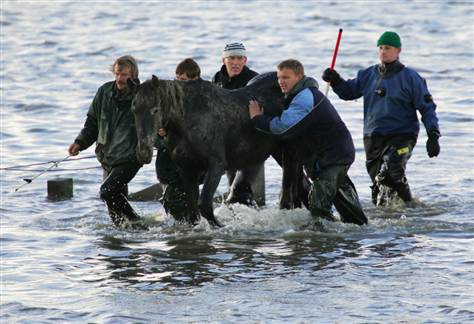 Rescue workers lead the last horse off the knoll. The horse later collapsed and was taken to a stable by tractor.

Boats grounded, helicopters too loud
The Dutch army also tried to rescue the animals, but called off the operation when water levels receded to less than three feet in some places, grounding pontoon boats.

Marrum’s mayor, Wil van den Berg, said helicopters were ruled out for transporting the animals, as the noise and lights might have panicked the animals and caused more to drown.

An animal rights group said it has filed a complaint against the horses’ owner and the operator of the wilderness area where they are stranded, since the Netherlands’ national weather service had put the country on alert for rising flood waters early Tuesday.

The Agriculture Ministry ordered an investigation into the incident.

“We’re going to work together with prosecutors to see whether there was any criminal act committed,” spokeswoman Anita Douven said. “That could be negligence, or possibly mishandling of the animals.