The Bristolian street artist Banksy has returned to Palestine to create another series of works, following his famous 2005 series painted on the West Bank barrier wall. This time Banksy has been busy in Gaza with a spoof video and a series of political murals to address arguably the most contentious controversial topic Banksy could have possibly used his stencil art to comment on – the Israeli-Palestinian conflict and the Gaza strip.

Banksy travelled to the Palestinian territory via a network of dark tunnels and he can be seen in the video scrambling in the dark . The video describes Gaza as ‘well away from the tourist track,’ then adding  ‘access is via a network of illegal tunnels’.

The viewer is then shown the devastation of Gaza since the conflict with children playing among the rubble. ‘The locals like it so much they never leave,’ it says, continuing ‘because they’re not allowed to’.

“Gaza is often described as ‘the world’s largest open air prison’ because no-one is allowed to enter or leave. But that seems a bit unfair to prisons – they don’t have their electricity and drinking water cut off randomly almost every day.” Banksy

The video then describes Gaza being ‘nestled in an exclusive setting (surrounded by a wall on three sides and a line of gun boats on the other), watched over by friendly neighbours (in 2014 Operation Protective Edge destroyed 18,000 homes).’

Banksy sarcastically invites the viewers to see the opportunities Gaza has to offer.

‘Development opportunities are everywhere. (no cement has been allowed into Gaza since the bombing). ‘ then adding ‘plenty of scope for refurbishment.’

Banksy created some of his trademark spray painted artwork amongst the bombed rubble in the form of a stencil of children swinging from a watch tower as though it was a fairground ride.

A third stencil on a demolished building is of a kitten playing with a coiled ball of rusted metal as if it was a soft ball of wool.

“A local man came up and said ‘Please – what does this mean?’ I explained I wanted to highlight the destruction in Gaza by posting photos on my website – but on the internet people only look at pictures of kittens.” Banksy

‘This cat tells the whole world that she is missing joy in her life,’ a local man says, pointing to the Banksy stencil. 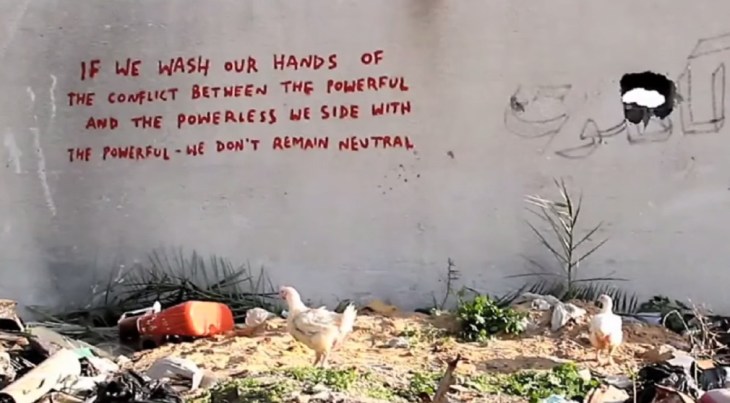